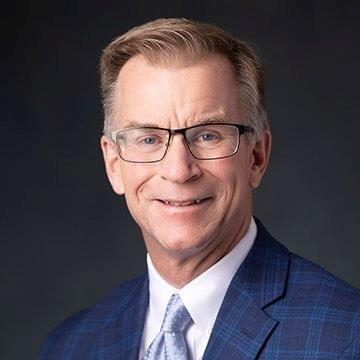 Brother Chestnut has been a senior financial professional for over 35 years working across a number of industries, including publicly traded billion-dollar organizations, privately held companies, and groups purchased by private equity. Rob earned both his BS in Accounting and MBA from the University of Kansas and has since spent many years as a Controller and a Chief Financial Officer and financial executive in the Kansas City Area in both manufacturing and services sectors. He was named 2017 CFO of the Year by the Kansas City Business Journal.

In addition to his career within industry, Rob served Lawrence, Kansas as City Commissioner and in 2009, served a 2-year term as Mayor. Rob has been on the board of the Pooled Money Investment Board for the State of Kansas and currently serves on the Board of Trustees for LMH Health for the last 11 years. Rob and his family also fund Momentum Grants via the Douglas County Community Foundation supporting local nonprofit organizations.

As an undergraduate, Rob participated in many of the intramural football and basketball teams, competing for Gamma-O and remains proud that he and his 1980 pledge class were able to leave a lasting impact on the chapter house, as they were the pledge class to cast the letters in front of the house. As for what Gamma-O means to him, Rob says “My pledge class was made up of a very diverse group of young men. Over 4 years, I was fortunate to learn from them and develop skills that have served me well over the last 40 years. I have so many memories of my time in the house that will be with me for the rest of my life. As a resident of Lawrence, I get a smile of my face every time I drive by the house on Emery Road.”